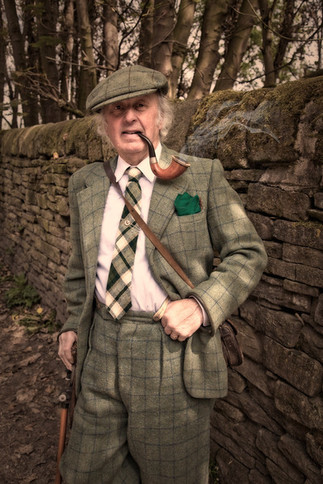 Evelyn Waugh was a first class snob who writes about the upper echelons of the British Upper Class. While he is often deeply satirical, he writes with a warmth for the traditional, highly structured society that his characters inhabit.
Oddly, you can view this story through a Marxist lens and see a clear criticism of the upper class and how they misuse their power, are often hypocritical and how they idealise country life, appropriating its culture without ever really understanding it. Remember ‘death of the author’ — it doesn’t matter if this was not what Waugh intended.

Arthur Evelyn St. John Waugh was an English writer of novels, biographies and travel books. He was also a prolific journalist and reviewer of books. His most famous works include the early satires Decline and Fall (1928) and A Handful of Dust (1934), the novel Brideshead Revisited (1945) and the Second World War trilogy Sword of Honour (1952–61). As a writer, Waugh is recognised as one of the great prose stylists of the English language in the 20th century, although many critics, uneasy with its cast and its creed, excoriated it for its stylistic excess, its snobbery, and its abandonment of the cool satire they associated with his work.

In a nutshell: The central figure is  Mr Beverly Metcalfe, a wonderful, harmless old humbug who after a successful career abroad, has recently retired with his wife to the country. He fancies himself a country gentleman; everyone else knows better. Waugh sketches in three of Metcalfe’s landowning neighbors — an elitist, artsy-crafty bohemian couple, a relatively poor colonel, and a “rich and kind and rather greedy” widow. The five neighbors are brought together (and quite comically driven apart) by a threat to their property from an outsider. It is rich in individual and social satire, while being an affectionate look at the eccentricities of the British class system.

Get together (2-3 people) and choose 5 questions to explore in detail. Write the answers in your blog.

​
This entry was posted in Virtual period S4 2017 and tagged AS exam, AS story, story, victorianism. Bookmark the permalink.