“When I was Fair and Young, and Favour Graced Me” by Queen Elizabeth

“When I Was Fair and Young”

When I was fair and young, then favor graced me.
Of many was I sought their mistress for to be,
But I did scorn them all and answered them therefore:
Go, go, go, seek some other where, importune me no more.

How many weeping eyes I made to pine in woe,
How many sighing hearts I have not skill to show,
But I the prouder grew and still this spake therefore:
Go, go, go, seek some other where, importune me no more.

Then spake fair Venus’ son, that proud victorious boy,
Saying: You dainty dame, for that you be so coy,
I will so pluck your plumes as you shall say no more:
Go, go, go, seek some other where, importune me no more.

As soon as he had said, such change grew in my breast
That neither night nor day I could take any rest.
Wherefore I did repent that I had said before:
Go, go, go, seek some other where, importune me no more.

4. How is beauty treated?

A few days before his public torture and execution, Chidiock Tichborne (1558-86) wrote a memorable lament, or elegy, for himself. (Anthologies of English poetry tend not mention the torture, but Tichborne was in fact “drawn and quartered,” a punishment so extreme that I’ll let readers look it up for themselves.) He may even have composed the poem, as the traditional subtitle says, “the night before his execution.” Tichborne was a well-born Catholic, convicted of treason for plotting the assassination of Queen Elizabeth after she began suppressing his religion.

Yet the poem’s extraordinary force doesn’t merely depend on that drama of where and when it was composed. In that time of religious passion in all its ugliness, those violent energies don’t drive the poem, either. The energy of the poem comes from a certain way of thinking and writing: an explosive intensity of focus, the ability to illustrate a dire situation with a series of compact metaphors, repeating the idea of early death while varying it just enough with each new figure of speech to concentrate the momentum by another degree.

The old saying for plain, direct speech is “tell it in words of one syllable.” Tichborne’s poem makes that literal: There is not a two-syllable word in it. (Some versions have “fall’n” instead of “dead” in the eighth line.) In such a severe structure, small variations have large effects: The three active verbs in the first three lines of the final stanza—”I sought,” “I looked for,” “I trod”—have an animating effect, in contrast with the opening “My … is …”  With that surge in energy, it is a little as if the poet looks up directly at the reader. 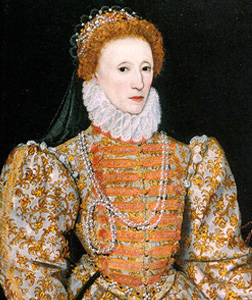 To accompany Tichborne’s well-known lament, here is another poem of the same period, said to be written by Queen Elizabeth (1533-1603). Her poem, too, uses a rather simple vocabulary and proceeds by parallelism and refrain. Although not nearly the equal of Tichborne’s poem, “When I Was Fair and Young” is written expertly in a similar, tersely declarative manner. Scholars believe that the poem responds to the middle-aged queen’s courtship by a noble French suitor.

In that time of ugly religious passions, the stringent education available to a privileged few made it possible for excellent poetry to be written by a ruler—and for a great poem to be composed by a young man condemned to death for trying to kill her.

6. How is the article connected to the poem?

7. Read the following poem and compare it to the one you have just read.

Tichborne’s “Elegy” (Written with his own hand in the tower before his execution).

My prime of youth is but a frost of cares,
My feast of joy is but a dish of pain,
My crop of corn is but a field of tares,
And all my good is but vain hope of gain.
The day is gone and yet I saw no sun,
And now I live, and now my life is done.

The spring is past, and yet it hath not sprung,
The fruit is dead, and yet the leaves are green,
My youth is gone, and yet I am but young,
I saw the world, and yet I was not seen,
My thread is cut, and yet it was not spun,
And now I live, and now my life is done.

I sought my death and found it in my womb,
I looked for life and saw it was a shade,
I trod the earth and knew it was my tomb,
And now I die, and now I am but made.
The glass is full, and now the glass is run,
And now I live, and now my life is done.

This entry was posted in Senior 4 2013 and tagged AS poetry, Poetry. Bookmark the permalink.