Last class we finished reading the story and you worked on some important facts:

Let´s get deeper into the story 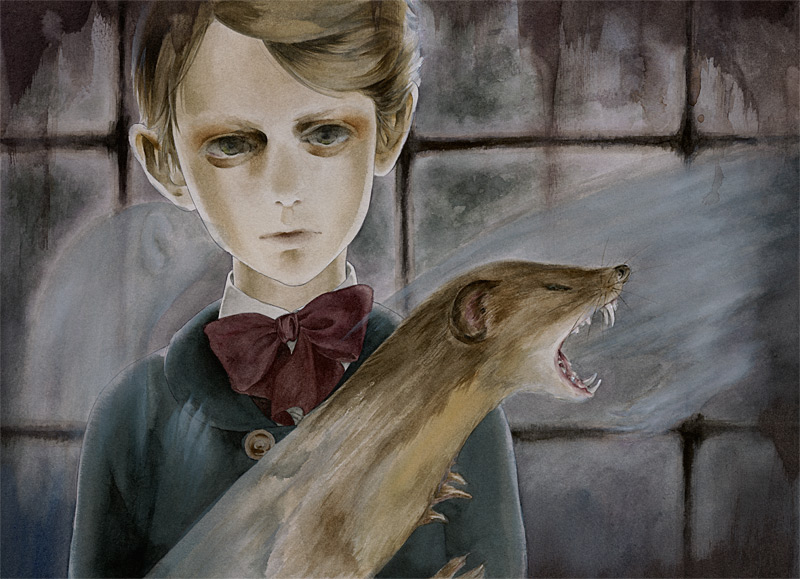 Conradin, a ten-year-old boy whom the doctor has given less than five years to live, is antagonized by his cousin and guardian, Mrs. De Ropp, who seems to take delight in thwarting him under the guise of taking care of him. Conradin finds escape in his vivid imagination and in an unused toolshed, in which he keeps two pets—a Houdan hen, on which he lavishes affection, and a ferret, which he fears and comes to venerate as a god.

Conradin names the ferret Sredni Vashtar and worships the beast as his god, bringing it flowers in season and celebrating festivals on special occasions, such as when his cousin suffers from a toothache. When his cousin notices him spending too much time in the shed, she discovers the Houdan hen and sells it. She is surprised when Conradin fails to show any emotion at the news, but Conradin changes his usual worshiping ritual. Instead of chanting Sredni Vashtar’s praises, he asks an unnamed boon of his god. Every day he repeats his request for the one wish from the ferret. Mrs. De Ropp, noticing his frequent visits to the toolshed, concludes that he must have something hidden there, which she assumes to be guinea pigs. She ransacks his room until she finds the key to the cage and goes out to the shed.

As she goes to the shed, Conradin watches her and imagines her triumph over him and his subsequent declining health under her oppressive care. He does not see her emerge from the shed for a long time, however, and he begins to hope, chanting to Sredni Vashtar. Finally, he notices the ferret coming out of the shed with dark, wet stains around its mouth and throat.

The maid announces tea and asks Conradin where his cousin is. He tells her that Mrs. De Ropp has gone to the shed, and the maid goes to announce tea to her. Conradin calmly butters his toast, relishing every moment as he hears the scream of the maid and the loud sobs and talk of the kitchen help, followed by the footsteps of someone carrying a heavy burden. Then he hears the kitchen help discussing who will tell the young boy the news as he takes another piece of toast to butter.

-Compare the story we read and the video. Make a brief comment about this.

Have a look at this presentation made by other students and make comments.

-Do you agree with the analysis?

-Can you mention other themes?

-Can you find quotations for the themes mentioned in the presentation and those you have added?

This entry was posted in 2016, Senior 2 2016 and tagged analysis, sredni vashtar. Bookmark the permalink.